Damaged fireproofing that is not patched properly can lead to life safety and liability issues. Jaime Almeida, vice president at CFM Construction Corp., Glastonbury, Conn., was facing such an issue that involved a large renovation project at MidState Medical Center, Meriden, Conn.

MidState is a 156-bed, acute-care hospital with more than 1,200 employees and 350 affiliated physicians. The hospital is a member of Hartford HealthCare, Connecticut’s largest health care system, and has been serving its community since 1998. The medical center’s services include surgery, emergency medicine, oncology, wound care and more.

Almeida and his crew were retrofitting an existing space within MidState Medical Center to build out a new pharmacy with a clean room at the hospital. The project called for the removal of fireproofing from existing steel beams to allow for the connection of clips to frame new steel members.

“At the end of the day, all of the fireproofing needs to be intact,” Almeida says. “When the right fireproofing solution is not used, the integrity of the building is compromised.”

Kurt Martin, health care facilities manager at MidState, adds, “The condition of the fireproofing must be compliant. Code requires any repair of fireproofing to match the existing fireproofing that is on the beam.”

Exposed beams during a fire event are subject to failure. This becomes a life safety issue for occupants and a liability for building stakeholders.

Heat from a fire will raise the temperature of steel to approximately 1,500 F in a relatively short period of time. At approximately 1,100 F, steel loses about 65% of its strength. Failure can occur when just the portion of the structure left exposed reaches this temperature.

Traditionally, fireproofing repair has been accomplished using spray equipment. Often, however, missing fireproofing goes unnoticed and untreated. Spraying a patch comes with many challenges. For example, spray-applying a small patch can be cost-prohibitive when factoring in the equipment and labor for multiple workers.

To help ensure the proper patch is made, CFM Construction uses Universal Fireproofing Patch (UFP) on all of its fireproofing patch jobs.

UFP is a do-it-yourself patch solution that can be applied by a single worker. It mixes with water and can be applied with a trowel. Developed by Tim Vellrath, a 40-year fireproofing contractor and engineer, the product makes the process of patching fireproofing fast and simple, and it has been fully vetted to perform beyond performance regulations.

The MidState Medical Center project included 75 connection points that needed patching. Typically, such a patching job would require bringing in spray equipment and a two-person crew to operate it. The approximate cost for this hospital’s fireproofing patching job using traditional means would total approximately $5,600. However, because UFP can be applied with a single worker and does not require any equipment, the cost to MidState was approximately $2,200, more than 50% less than traditional patching.

The other primary benefit of using UFP over spray equipment was that UFP has been tested specifically as a patch solution and tested to be compatible with both fiber and cementitious applications. It also has been tested as a trowel-applied fireproofing patch. UFP has been ASTM E- and UL-tested, and is certified by Intertek and VTEC Labs. The product’s adhesion and cohesion make it five times stronger and significantly denser than existing fireproof patch alternatives, according to Almeida.

“UFP is key to patching fireproofing for a number of reasons,” Almeida says. “It is very easy to use. You simply mix it, and then apply. Furthermore, it adheres really well to the substrate.”

This is important because spray-applied fireproofing tends to provide less adhesion during a patch application because the spray material contains a slip agent to help it move through the hose.

“Using UFP gave us the flexibility to bring one worker in to do patch jobs,” Almeida says. “I didn’t need to hire a crew and bring in equipment. And this made scheduling the work much easier.” 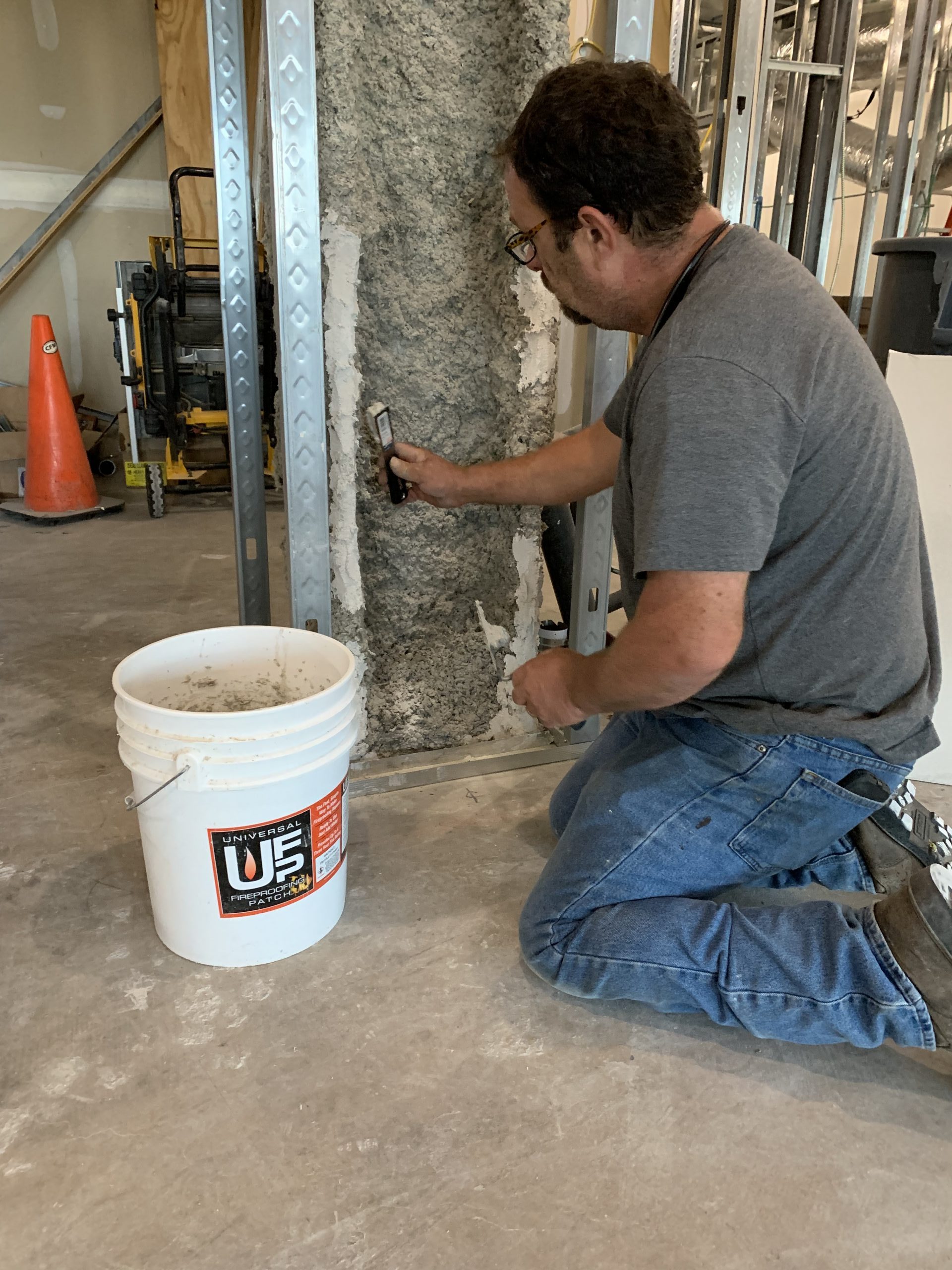 Available Options:
The general contractor in this case had few options. It was a public facility so people and local officials viewed the entire construction process with a close eye. Ironically, some of the existing fireproofing had fallen off prior to the start of construction and was painted over in an attempt to conceal the obvious.

Economics:
The repair work as described translated into a day rate of $1,650.00 plus tax. An option that was not available at the time was the Universal Fireproofing Patch. The material cost would have been $190.00 and using the same number of man hours (16) the labor cost would have been $720.00, for a total direct patch cost of $910.00 plus tax. There would be no additional overhead as they were on-site already and could have made better use of field labor hours for additional savings.