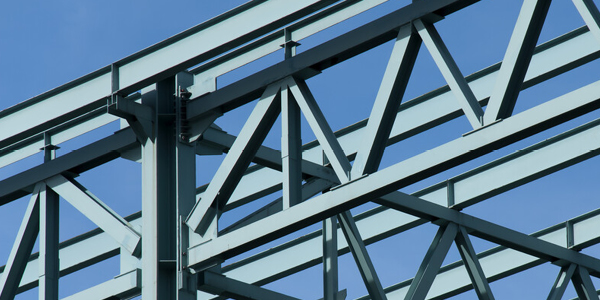 In the world of fireproofing, a beam is defined as a structural member with potential heat exposure on 3 sides. The assumption is that the 4th side is up against a floor deck or roof deck. A column, on the other hand, has heat exposure on all four sides of that structural member {note: orientation is not part of this definition}; therefore if you have an oblique member, it should be considered a column because there is still fire exposure on all sides, even though it is diagonally oriented. Any sized structural member has more exposure as a column as opposed to a beam and to that end most fire test laboratories will automatically accept column test results as applicable for beam applications.

However, that definition statement notwithstanding, a structural member’s vulnerability is based on really two conditions: 1). intensity, duration and exposure to heat to that structural member and 2). the ability of the member to absorb heat until it reaches failure. To really understand the vulnerability issues, there are several thermodynamic principles within that statement that we have to recognize.

Failure is assumed when the temperature of the structural member is 250°F above ambient, assumed to be 75°F, or failure can be textbook defined as 325°F. Failure is not when collapse is eminent. Defined failure is reached at a given temperature due to the vulnerability of the steel, losing 60% of its original strength at the relatively low temperature of 1100°F.

A beam, or column, of any specific size, W 8 x 10, W 10 x 49, for example, has a differing mass and a differing area of potential exposure. The fireproofing industry attempts to consolidate these variances in a numerical ratio, call the “W/D” ratio. Recognizing that the W/D ratio is a discussion within itself; but briefly, a W/D ratio is developed by W (weight or mass) of the member and its heated perimeter (D); i.e. a W/D beam ratio of a W 8 x 10 is 0.37; a W 10 x 59 is 0.99, etc. These ratios can be calculated by hand but most material manufacturers provide easy to read tables with the same resulting information.

With the additional side of potential heat exposure, as in the case of a column, the W/D ratios are somewhat different. A W/D ratio of a W 8 x 10 utilized as a column is 0.32, while a W/D ratio of a W 10 x 49 also used as a column is 0.83. These numbers are crucial to determine the material thickness, for example, a 1 hour rating. The required applied material thickness is quite variable. It is important to note that these variations will and do have a direct impact upon the bid price and application duration.

The W/D ratio in a real life situation: a local Civic Center had several massive 12’ high trusses crossing over the hockey rink. The top cord, correctly could be figured as a beam, with only 3 sides potentially exposed to heat from a fire. The oblique members, literally W 10 x 49’s, and the bottom cord had to be figured as columns, requiring additional thickness of applied SFRM. The impact upon the job was an additional 800 bags of material.

As this is general guidance, you should use your resources and best judgment; each situation can present its own challenges.